Haul or how I've spent money destined for tutoring

Um, yeah... I was to go for a private lessons and learn maths, but some Internet courses made me understand it quite well (actually we'll see!) so I kept my purse closed until I went to a drug store... A couple times during the last week.

I'm thinking of turning my blog into Polish, as least some of the posts, like those, as only Polish women may benefit from most of my reviews. On the other hand, I think it'd do unessecary mess here. So maybe a mash-up of languages? I'll try it when I'll be reviewing next cosmetic. 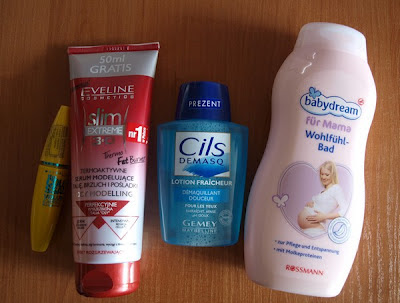 Maybelline, the Colossal Volum' espress waterproof mascara - my one and only favourite mascara ever. Well, honestly, I was to buy something cheaper (WIBO Growing Lashes) and not in that moment, but because WIBO wasn't waterproof I thought I'd stay with Maybelline. Plus, the make-up remover, shown in the photo as well, was added as a gift. Who'd deny it? I didn't try it yet, 'cause I still have m ZIAJA make-up remover, but I hope it'll be good.
Maybelline is a great as always.

Eveline Slim Thermo Fat Burner - I've tried many of such cosmetics and none was as half as good as this one. Eveline's Thermo Fat Burner just WORKS. And it works really quickly, actually. I like that warm effects it makes, though I admit, now, as summer came, it's sometimes a little uncomfortable to have a great heat on my belly and tighs. Maybe I'll try some serum with cooling effect, but for sure it'll be from Eveline.

Babydream Bathing cream for mothers - as many bloggers, I use it manly for washing my hair. It's pretty good, washes oils well, leaves hair soft and light. It has pretty nice smell as well. The one disadvantage of it is it's too watery so its efficiency isn't great. 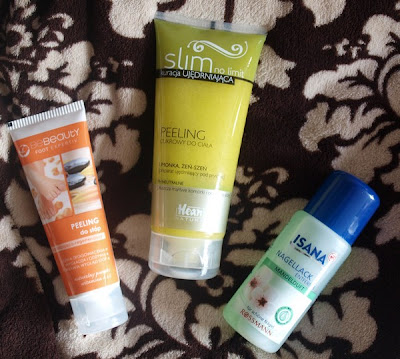 BeBeauty, peeling for feet - I've read some great reviews about the product so, knowing my feet need some special treatment, bought it without hesitating. It's good, but not perfect. But I think, for its price (which is like, 3PLN? don't remember really) you wouldn't find anything better. Maybe if you even paid more, you wouldn't be more pleased.

Hean, Slim no limit, sugar firming peeling - does it really firm? It's hard to say, I think it works just like other peelings, the most work comes from massaging. But it has a beautiful citrus smell and motes are big enough to peel well. Its efficency isn't good as you have to put a lot of the peeling on your hand to feel you peel you body in a proper way, but still, I really, really like it.

Isana, nail-varnish remover - and this one is the best nail-varnish remover I've ever used. I've read many positive reviews about it but had no idea how it would be better than others. But it is, honestly. It cleans your nails so easily and quickly you may actually close your eyes while removing a varnish/conditioner. Nothing stays! Plus it has really nice smell for a remover. 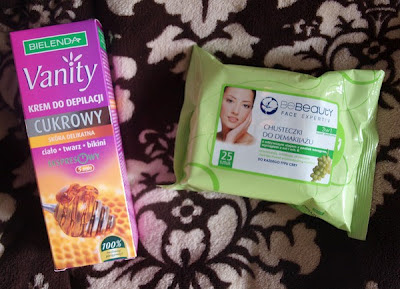 Bielenda, Vanity, sugar hair removal cream - I have a horrible allergy to hair removal creams. No matter which brand or type I'd choose, it always ended the same: scratching myself to blood. Yes, every single one cream does this to me, except for this one. I have no idea why: I've used many creams, for sensitive skin as well, by lots of brands, and only this one is good for me. Does it work well, too? It's pretty good. Five minutes is enough to remove most of your hair, but, sadly, you often must put more cream (or keep the old one) on some areas. It comes mostly for bikini areas, it works perfect with leg hair, though.

BeBeauty, make-up remover tissues - didn't try them yet. I don't use such tissues daily, but they are a really good way when you don't have conditions or time to clean your face with liquids, gels, milks and so on. So everytime I know I'll be at place when removing make-up may be hard, I take the tissues with me. They don't replace a full cleansing, but still, they better than nothing.

I have some other cosmetics to talk about, but I think it's enough for now.
Autor: Cassidy o 16:32 11 komentarzy:

Ok, maybe it's not exactly Lolita - it was so hot I didn't wear a blouse nor tights or socks (actually, I don't have proper nice socks - I plan to buy ones from H&M soon), in the end I didn't even wear a petticoat, but let's face it - full lolita outfit isn't very comfortable for hot shopping day. May everyone be happy, let's call it loli inspired coord.

Okay, so I shut up and show you what I wore: 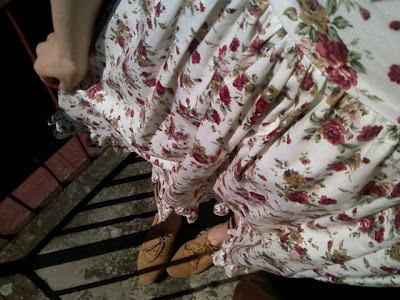 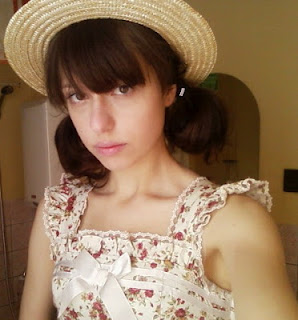 I really liked how my hair looked but it weren't too stable so I turned my buns into ponytails... 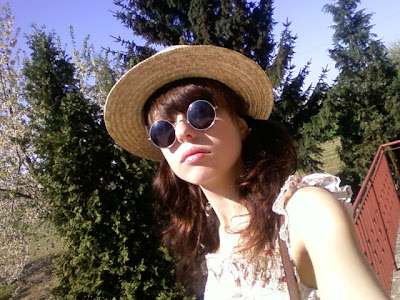 It didn't look as good, but at least I was sure I wouldn't have corrected it all the time.

Also, I know I look weird wearing those sunglasses, but the truth is, I look weird in any I could try. So I thought I'll wear all those I like if every single one gives me such a strange look. 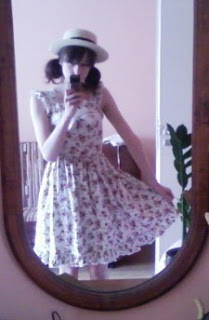 I know this one, most important pic is too small, but the rest of the photo was the vicinity of the mirror so I cut it, and my phone was adjusted to take such small photos... Nevermind, I believe I'll wear this outfit once again in the future and thus, take better photos.

Despite being at home since Friday, I had totally no time to write. I went shopping, then spent three wonderful days with my boyfriend, eventually I was just relaxing while watching Glee and The Big Bang Theory. I have one lolita-inspired outfit to show, but since I left my phone USB in Cracow, those photos must wait.
For now, then, part two of the Titanic Adventure! 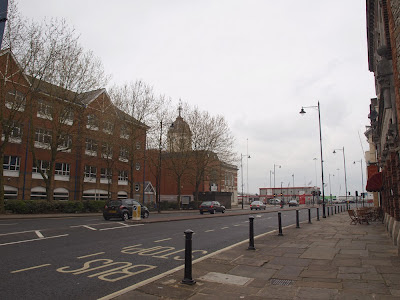 The weather was good when we were leaving London, yet it started raining during our journey. Southampton welcomed us with cold and rain as well, but we weren't upset because of that. We had more interesting things to do than hiding from the water... Actually, we were just making our way towards big amount of water... The harbour. 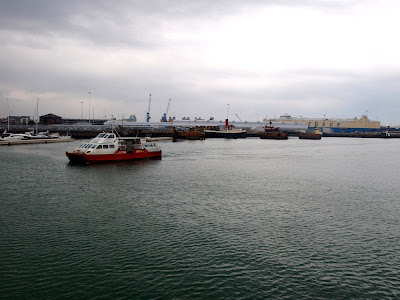 The same harbour Titanic left one hundred years ago (not the same docks, though, we didn't know their exact location). 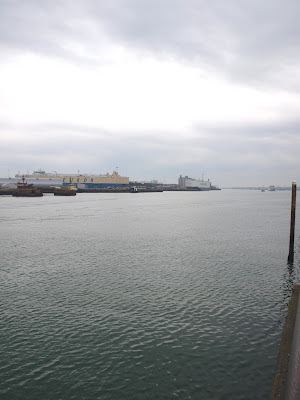 The harbour is quite narrow, nearly the width of an average lake, but it still has its effect. Here are the photos of its last part, you can see the exit towards the sea on the horizon.

Then we walked towards the Maritime Museum... 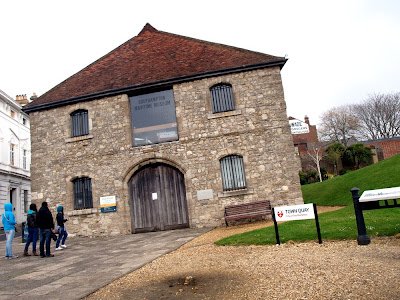 Guess what, it was closed. We didn't expect that, I mean, who would close the TITANIC museum on its centenary? We didn't even check it on the Internet, 'cause seriously, it was something that certainly should have been opened, maybe even had some special events on that day... Later it turned out, all showpieces have been moved to another museum, unfortunately we didn't manage to get to it before it was closed.

It started raining a lot, so we, quite upset now and wet, decided to go to the hotel. On our way, however, we decided to buy an umbrella in a elapsed shop and it was our best choice of the day: F. asked the cashier if some events were to take place that night and she not only told us about them, but also explained how to get to the place they were to happen.
Our hotel room was great, but I don't think it makes sense putting here pics of it. Corridors, however, were truly interesting: we agreed they looked somehow like old ship ones, narrow and with low ceiling. 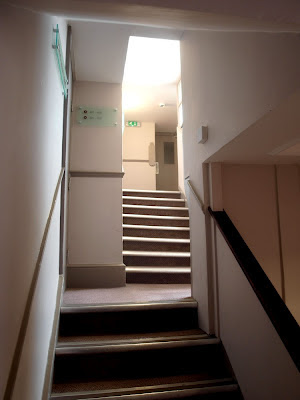 We could see the harbour out of our hotel window, you must admit it's something special for every Titanic lover ;) the photo doesn't exactly show it, but if you look closer, you'll see the cranes. 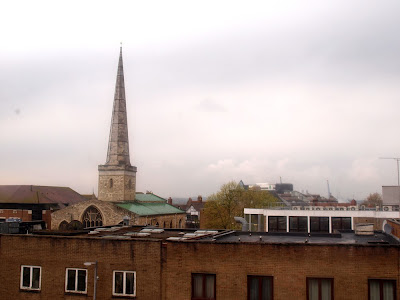 After having a bath, a cup of tea and coffee and small meal, we looked at map and planned our further activities.

We arrived at city centre and went to the mall - F. was looking for adapter to UK plugs. Surprisingly, we hit on some other event... 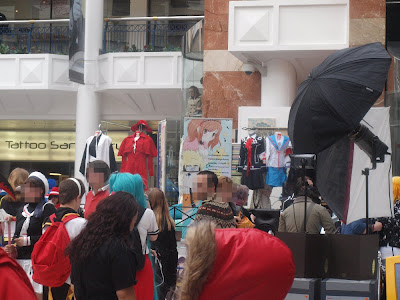 Cosplay Anime Manga Event! I was in love with M&A several years ago so it still had some meaning to me, especially seeing girls dressed as Sailor Mars or Sailor Mercury, but in fact, I took the photo for my boyfriend who's problably one step from becoming an otaku, yet he's not interested in conventions at all. You can only imagine how happy he was when I showed him this pic, he nearly wanted to go to Southampton RIGHT NOW. Have some reasons to take him there next year :D

The mall wasn't our goal, however. The reason we went there was we got to know something big was prepared in a park nearby. 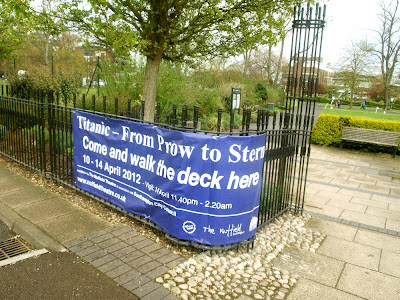 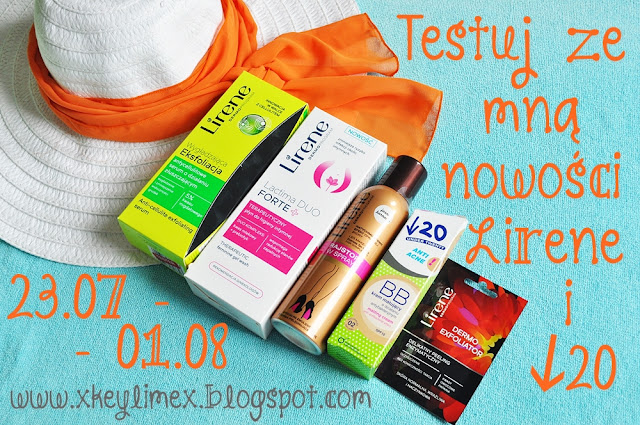